Hard disks are getting widely replaced by solid state drives to improve performance and reliability.Main advantage of SSD is the read and write speed it provides compared to that of hard disk.Also, SSD doesn’t contain any moving parts and produces less heat.Since the boot time of my system and app launch  was increasing day by day, I recently bought a 120 GB m.2 internal SSD of Western Digital.Here are my benchmarks on SSD vs HDD. 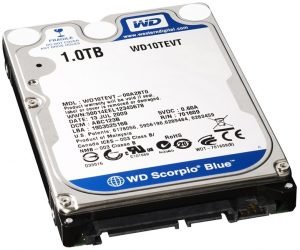 Disks is a tool used in most Linux distributions to manage storage devices connected to the system.Disk read, write and access time benchmarks can be done using this utility.The following were the results of benchmark of my 1TB Western Digital hard disk and 120 GB SSD.

As you can see, the read rate is much higher and almost steady.This will have great impact on boot and app launch time.

My Linux Mint installation on the old hard drive was taking around two minutes to complete booting.The boot time was increasing with daily usage.Now, with the SSD, Linux Mint is taking only less than 10 seconds to boot! This was a drastic performance improvement.

Startup time for Chromium browser was around 20 seconds in my old installation.Same profile, now only takes just 1 second to load! I can feel the difference in loading heavy software like Android Studio.

SSD is the clear winner in all performance comparisons. Replacing hard drive with a solid state drive is a wise decision.You will really feel the performance improvement made on your system.Its like giving a new life to your personal computer.I recommend installing the operating system on SSD and using hard disk for storing other data.